Waaay back in the 80's, TSR put out an awesome (and strange) role-playing campaign setting called Spelljammer. Its all about space travel in a fantasy universe. This campaign setting was so far out that most fans of AD&D of the time had a hard time getting into it. This resulted in the mothballing of the setting in favor of more popular lines like Forgotten Realms and Planescape.

Though I understand the problems people had with the setting, I still had and have a strong affection for the setting. Flying ships, space elves, and cosmic themes all call to my weird heart. And so I am going to be adapting/converting Spelljammer friendly material using the Blood & Treasure game rules. This will be primarily for my home campaign, but I hope to make some solid and fun material for all of those spelljammer fans out there. 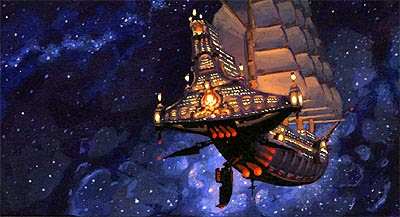 The Voidjammer setting is to be all about travel to other worlds in a fantasy setting. This is not a new notion mind you. The ancients long dreamed of Astral Travel, flying ships and journeys through the night sky.
The setting will mix both Greek views of Ptolemaic astronomy and Aristotelian physics with Xi,  the Chinese notion of spirit and flow. Space will still be a hostile place, but with more leeway for survival by plucky adventurers. But this survivability also includes plenty of dangerous denizens that can be far more deadly for the unwary.
But don't let this high-falutin talk about philosophy and weird science put you off. The setting will be dominated by the Rule of Cool, with archaic physics only used to make weirdly wonderful settings and all manner of high strangeness. Voidjammer will be chock-full of goofy-fun and themes from my favorite comics, cartoons and cheesy movies. But all will not be silly. The universe is deadly dangerous, especially when things seem the most relaxed.

Much more to come! But to tide you over, here is my conversion of one of my favorite Spelljammer races: 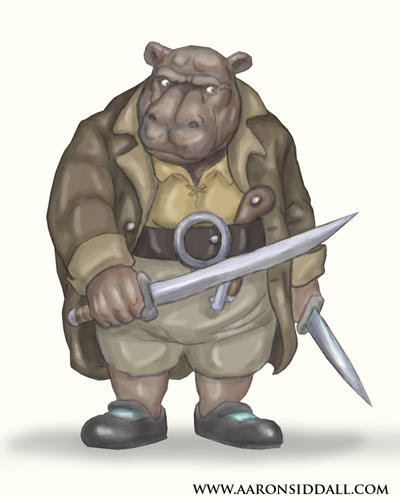 The giff are a race of powerfully muscled, hippopotami mercenaries. They are civilized in that they understand the basics of voidjamming, though they lack mages among their own race. Instead, they hire on with various groups throughout the universe as mercenaries, bodyguards, enforcers, and general leg-breakers.
Giff platoons can be hired by those looking for their muscle. The Mercane do a small business in Giff mercenaries, but usually local contractors perform the task.
The Giff is a humanoid, with stocky, flat, cylindrical legs and a humanoid torso, arms, and fingers. Its chest is broad and supports a hippopotamus head with a naturally hard heads. Giff come in colors ranging from black to gray to gold, and many have colorful tattoos that leave their bodies a patchwork record of past victories.
Much to the surprise of many folks, the Giff are almost exclusively vegetarian. In fact, except for the eating of an occasional fish, Giff consider the concept of eating "carrion" to be appalling. Giff can eat many plants that are far too course for most humanoids digestion such as grasses, leaves, and the shells and seeds of nuts. Many Giff believe that the deficiency of physical strength amongst other races is due to the lack of "proper" foods. A famous Giff "stew" called Yaneesh, (boiled spiced grass) is a favorite. And while the yellow peppery broth is edible to dwarves, elves, humans, gnomes and halflings the grass and shoots in it are not. Other Giff cooking should be considered similarly hazardous.
On board ship, the Giff have their own quarters, and will often request to bring on their own large weapons. They favor greek fire projectors and bombards for ground work, and will happily blaze away at opponents, regardless of the tactical situation. The Giff require the ships of others because they rarely have spellcasting abilities of their own. Giff clerics usually revere a goddess referred to as The Great Mother (closely allied with The Seekers of Ptah), but will sometimes follow war deities.
CHARACTER CREATION
Giff characters modify their starting ability scores as follows: Str +4 (max. 20), Con +2, Int -2, Cha -1. As large creatures, their armor costs double normal. Giff have darkvision to a range of 60 feet.
Their thick hide gives them a +2 bonus to Armor Class, and they can head-butt for 1d8 points of damage. Giff have a Knack for bend bars and break down doors and are proficient in the use of firearms, cannon and explosives. Giff speak Giff, and Common but may also know Elven, Dwarf, Orc, or Goblin.
Giff can advance as Anarchists, Clerics, Curmudgeons, Fighters and Thieves and can multiclass as Anarchist-Fighters, Cleric-Fighters and Fighter-Thieves (Marines). Giff may advance to 9th level.
at April 02, 2014
Email ThisBlogThis!Share to TwitterShare to FacebookShare to Pinterest
Labels: Blood and Treasure, Voidjammer

I always had a fondness for the Giff.

Curse you! I wanted to do a Spelljammer game with Blood & Treasure too. Seriously, I love this setting and am waiting to see what you do with it.

I would be happy to compare notes. Drop me a line at asiddall AT msn DOT com.

Thank you but I don't have any definite notes, just some basic ideas. One of those ideas I WAS going to blog about. You know how that goes. :)

You are aware that there is already a Voidjammers setting. You can find it on Dragonsfoot forums. I believe it was written for Basic Fantasy RPG by Chris Gonnerman. I have it on my server.

Okay, nevermind. It was called "Voidspanners". Anyway, I'm finding all of this very interesting.

Nope. However now that I have, I am intrigued. Unfortunately, I cannot read the Voidspanner game material I have found. Would you direct me to a pdf or rtf?