With the days getting shorter and winter on the way, I like to think on running an RPG campaign. And so as I drift off to sleep at night, my mind starts building worlds and campaign settings and the details of that world. And so I have begun fiddling with a setting recently for use in my home game. I will be using the Blood and Treasure 2nd Edition rules by John Stater for this campaign.

Welcome to Earth, about seven million years in the future. Magic is back, mostly displacing science, and it is both After the End and Just Before the End: Civilization has pretty much collapsed, with only a few organized civilizations still in operation. Monsters infest the wilderness, gleaned from the ancient past and transplanted from alien worlds.
The setting is inspired by wide range of Sword and Sorcery, Post Apocalypse and Science Fantasy settings, books, movies, cartoons and comics. I'm going for a pulpy, gritty feel for the setting with a fair bit of gallows humor mixed in.

SETTING BASICS
The world is once again wild and full of mystery. Most people grow up in small kingdoms, wild tribes or in the decadent city-states. Magic is the great key to power, and the mightiest Wizards, Clerics and Druids rule supreme where they dwell while lesser dabblers sell potions and prophecies where they can. All of the classes presented in the Blood and Treasure 2E Rulebook are in use, including all of the spells therein. I will also be using the Science rules on pages 244-247. So a melding of weird science and magic can be found throughout the setting.

ALIGNMENT
As this is a Sword and Sorcery setting, I am going to avoid the complexities of the Good vs. Evil paradigm, and the Nine-fold Alignment system. Rather, in the world of Pangea Ultima, players to choose among three alignments when creating a character: Lawful, implying honor and respect for society's rules; Chaotic, implying rebelliousness and individualism; and Neutral, seeking a balance between the extremes. This alignment system better handles the Black and Grey morality of the setting. The gods and goddesses will also be tied into these alignments.

RACES
The standard fantasy races are not suitable for Pangea Ultima. Most of the people of the setting are human, near-human or half-human. Other races DO exist, but are usually pretty alien and awful. Below are the most wide-ranging peoples of Pangea Ultima:

Aasimar
These glorious, beautiful creatures trace their ancestry to Celestial beings from higher dimensions. It is said that the Celestial's are the height of what mankind can become, and the Aasimar are a stepping stone towards that perfection. Some have physical traits suggesting their celestial heritage, like silver hair, enlarged eyes (often lacking sclera) and blue blood. Most can blend with human populations, but will always stand out as special. Not all aasimar are good, as many have a natural disdain for "common" folk, and can be quite cruel towards whomever they see as wicked.
Aasimar average 60″ in height. They have a movement rate of 30′ per round. Aasimar live to be 750 years old. They start the game speaking Common and Celestial plus bonus languages for high intelligence.
At character creation, aasimar add +1 to wisdom (max. of 18) and subtract 1 from constitution (min. of 3).
Aasimar are surprised on a 1 in 1d6 and have cold and fire resistance. They can cast daylight 1/day as a spellcaster with a level equal to the Aasimar’s level.
Aasimar clerics can multi-class as fighters or magic users.

Humans
Humans should require no description, for weird fantasy humans and real humans are not terribly different. Of course, in a fantasy world, “human” can be extended to creatures that look inhuman (strange colors of skin, bony protrusions), but which are essentially human beings.
Humans average 66″ in height and have a movement rate of 30′ per round. They can live to be 110 years old. All humans start the game knowing Common, plus any bonus languages they wish for high intelligence.
Humans get a 10% bonus to all earned experience points. Thus, when a dwarf earns 100 XP, a human earns 110 XP. They also receive a bonus feat at 1st level or, if you do not use feats in your game, a +1 bonus to all of their saving throws to represent their uncanny luck.
Humans cannot multi-class (i.e. advance in two classes simultaneously), but they can dual-class, or change classes at any point during play.

Half-Ogre
Half-ogres are the children of humans and ogres (giant cannibals). They look like brutish humans with swarthy and dull complexion, dark and lank hair, and large canine teeth. Half-ogres have no society of their own. If they live with ogres, they are the quick-thinking members of the tribe, ever on their toes to prove themselves worthy. If a half-ogre is reared in a human community, he learns to live with suspicion and fear, and often turns to a military or solitary occupation.
Half-ogres average 84″ in height and are built like gorillas. They have a movement rate of 30′ per round. Half-ogres live to be 80 years old. They start the game speaking Common and Ogre plus bonus languages for high intelligence. They can see 60′ in the dark.
At character creation, half-orcs add +1 to strength and constitution (max. of 18) and subtract 1 from their starting intelligence and charisma (min. of 3).
Half-Ogres can wield large weapons as though they were medium weapons.
Half-ogres may dual-class as do humans.

Neanderthal (Flatheads/Ugs)
Neanderthals are close kin to human beings. Some assume them to be stupid, due to their large brow ridges, receding chins, and slightly shorter, denser bodies. In Pangea Ultima, they are the high tech stone users, building cities of stone (Flintstone-style).  Neanderthals have a well-organized chieftain system, armies, organized religion (druids mostly), etc. Many have found human society to their liking and dwell in human towns and cities as laborers and craftsmen.
Neanderthals average 48″ tall. They have a movement rate of 30′ per round. Neanderthals live to be 110 years old. They start the game speaking Neanderthal plus bonus languages for high intelligence. They can also speak to apes of all kinds (but not monkeys).
At character creation, Neanderthals add +1 to constitution (max. of 18) and subtract 1 from their starting charisma (min. of 3).
Neanderthals enjoy a +3 bonus to task checks involving survival.
Neanderthals may dual-class as do humans.

Tieflings
Tieflings are humanoids descended from fiendish beings from lower planes (which are a problem in some regions). Some are indistinguishable from humans, while others have small horns, pointed teeth, red eyes, fine scales, or even cloven feet. No two tieflings are the same (except identical twins, of course). On the world of Pangea Ultima, Tieflings are generally the product of breeding programs, mixing debased lifeforms from the lower planes with human slaves. Despite this, not all tieflings are evil, many hate their lower-planar kinfolk with a passion.
Tieflings average 60″ in height. They have a movement rate of 40′ per round. They start the game speaking Common and Infernal plus bonus languages for high intelligence. Tieflings can see in the dark to a range of 60′. They speak Infernal and Common in addition to bonus languages for high intelligence.
At character creation, Tiefling add +1 to charisma (max of 18) and subtract 1 from wisdom (min of 3).
Tiefling have cold resistance and can cast darkness 1/day as a spellcaster with a level equal to the Tiefling’s level. They gain a +2 bonus to move silently.
Tiefling thieves can multi-class as clerics, fighters or magic-users.

NEXT
Clerics and Religion. Several monsters. And much more! 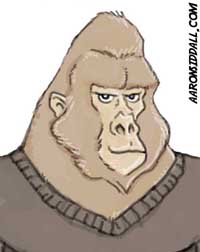