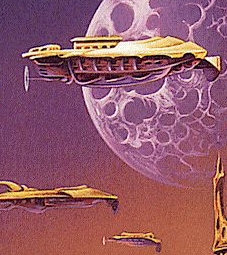 The primary method of moving through space is by Voidjamming, which converts magical energy into motive force. This is accomplished by the use of Voidjamming Helms. The standard Voidjammer Helm takes the form of a large, heavy throne-like chair, though how the helm appears and where it is placed on the ship varies considerably.

Both Major and Minor helms work in the same way - by converting magical energy into movement. Because the motive power of the ship comes from the conversion of spell energy, only mages and clerics are able to power this type of helm. While this provides movement, it is primarily used to push the ship forward; maneuvering is primarily accomplished through use of the ship's sails and oars.
A Helm installed on a ship maintains gravity (preset between No Gravity, Light Gravity, Normal Gravity, and Heavy Gravity), and creates the atmosphere envelope around the ship. It does NOT produce breathable air or heat the atmosphere on the ship, requiring other measures to do so.
A pilot seated in the helm receives a 360-degree mental picture of the area around the ship, out to normal visibility range. The pilot feels as if he or she is flying directly over the ship and able to look in all directions at once. Piloting the ship is always considered a full-round action, and the pilot cannot engage in other activities while controlling the ship. The voidjammer helm may be operated by any spellcaster seated upon it.

TONNAGE
All helms whether Minor or Major must take the ships overall Tonnage into account. Tonnage represents the overall weight and mass of the vehicle, including everyone and everything onboard. To determine a ships tonnage, use the following formula:

Living crew means a crewmember, and all of the things he, she or it will require to stay alive such as food, water and living space. Each such crewmember counts as one ton. Its not exact for everyone, but close enough for game purposes.

HELMS
There are many variations of Voidjammer Helms, but all can be broadly categorized as follows:

Minor Helm
A minor helm can be used to move up to 500 tons. A ship with a Minor Helm onboard can fly at a rate (in feet) equal to 5 times the pilot’s Intelligence score. When the ship passes within a gravity well, such as that generated by a large chunk of drifting matter, it slows to a speed of 30 feet. A Voidship can move at double speed and running speed. Standard Minor Helms can only be used by spellcasters.
When travelling away from any gravity wells, a ship with a minor helm allows a ship to travel between adjacent planets in 2d6+2 days.

Major Helm
A major helm can be used to move up to 1,000 tons. A ship with a Major Helm onboard can fly at a rate (in feet) equal to 10 times the pilot’s Intelligence score. When the ship passes within a gravity well, such as that generated by a large chunk of drifting matter, it slows to a speed of 60 feet. A Voidship can move at double speed and running speed. Standard Major Helms can only be used by spellcasters.
When travelling away from any gravity wells, a ship with a minor helm allows a ship to travel between adjacent planets in 1d6+1 days.
Major Voidjammer Helms cost 250,000 gps.


Other Helms
For one reason or another, variant types of helms have been developed. This is mostly due to some cultural or racial need or lack, but can often be just the fruit of whimsy. Whatever the reason, below are some different types of helms.


Gnomish Helms
As with so many things created by the Minoi Gnomes, by all logic, Gnomish helms should not be able to function, as they defy the very laws of nature. These Helms are created by innovative Minoi Scientists  (multi-class Scientist/Magic Users or Scientist/Clerics) and are composed of a dizzying array of joined devices. As with most other Gnomish creations, they include an incredibly large number of moving parts, bells and whistles, that create much commotion, but do very little.
Gnomish Helms function the same as Minor and Major Helms (see above), but are always considered cursed. For every day that a Gnomish Helm is in use, there is a 5% chance that something breaks down, requiring repairs. Such repairs take 2d6 hours, and often include "improvements" to the original.
They are the object of scorn and ridicule among the larger spacer population, and often at the epicenter of some of the void's most legendary pranks.
Minor Gnomish Helms cost: 50,000gp
Major Gnomish Helms cost: 125,000 gps

The preferred type of helm of slavers and monstrous races, these vile helms literally suck the life-force out of living creatures as a power source. These helms function the same as Major Helms (see above), but can be piloted by anyone with an INT of 6 or higher. They resemble a standard helm, but come equipped with a chair or other chamber (sometimes resembling an Electric Chair or Gas Chamber) into which a living person can be secured to act as fuel.
Every day of operation sucks 1d8 hit points from the creature within the helm, and requires a FORT save. These hit points cannot be regenerated while the creature remains within the helm. A failed saving throw results in 1 point of CON lost. If CON reaches 0 in this way the character cannot be raised or resurrected save through true resurrection of wish.
Lifejammer Helms cost: 80,000 gps

Series Helms (Alien Thulids)
These helms, invented by the Alien Thulids ("Mind Eaters" from Blood and Treasure GMG page 121), have been adapted for use by many other races with natural spell-like abilities. They resemble major and minor helms, but their primary difference is that they can be linked together, increasing their overall power, and can be used by non-mages, provided they have natural spell-like abilities available to them.
Each helm in the series can move a up to 50 tons, each additional helm increases the tons that can be moved by 50 tons. Generally, series helms contain between three and five active helms at any one time. Series helms otherwise function as Minor Helms, using the most intelligent helmsmans INT to determine speed.
Series Helm Cost: 75,000gp (per linked helm) Dwarves, long known for being one of the least-magical races in the void, power their Citadel ships through magical engines known as Forges. The Forge is found in a large foundry room, generally in the base of the ship, where Dwarves work around the clock, crafting and forging. Instead of using magical energy to create motive force, the Forge uses the creative energy of the Dwarves working within it.
Forge Helms can move a number of Tons equal to the number of dwarf craftsmen working in the forge x's 10. This has a minimum 100 tons (10 dwarves) up to a maximum of 3,000 tons (300 dwarves). Additional passengers, pets and docked craft add to the overall tonnage normally.
The Foreman (Forge-Priest) on duty is considered the Helmsman. A Dwarven Citadel with a Forge Helm onboard can fly at a rate (in feet) equal to 5 times the Forman's Intelligence score. When the ship passes within a gravity well, such as that generated by a large chunk of drifting matter, it slows to a speed of 30 feet.
The only races capable of replicating this technology are the the Azer, Monoi Gnomes, and the Fraal. Other races cannot make or use a Forge Helm, though many have tried.
As a side effect of the crafting and forging taking place in the foundry of ships powered by this type of helm, they are home to a huge amount of trade goods, and an even larger armoury.

Pump Helm
The Pump is a voidjamming helm that must be fed material in order to function. The pump furnace is a large, rune-covered iron sphere 15' in diameter. Two  pipes lead out from the furnaces, one on the top and the other at the  bottom.  They lead to the tail of the ship, spewing the smoke generated  by the burning of material inside the furnace.
In game terms, a pump furnace requires one pound of fuel every hour,and can move a voidjamming ship of up to 1,000 tons for one hour. After that, absolutely nothing is left of the material placed in the helm. Otherwise these Helms function as Major Helms, though non-spellcasters can pilot them.
A particularly gruesome contraption, The Pump is a creation of the unhumans; basically for the goblins and goblinkin races. Since the latest Unhuman Wars began, The Pump has increased in potency as well as popularity. Now, every captain in the goblin fleets wants one for his ship.
Pump Helm Cost: 600,000
at July 04, 2014
Email ThisBlogThis!Share to TwitterShare to FacebookShare to Pinterest
Labels: Blood and Treasure, Voidjammer, Voidships